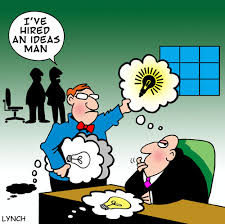 Now and then someone will ask where I get my ideas.  I resist the temptation to give Isaac Asimov’s answer: “A post office box in Cleveland.”

I skip from one era, event, person, or country to another for my novels, so curiosity about what inspires them is understandable.  The question of where ideas come from, however, contains such epistemological complexity that I have no answer for it.  I imagine them swirling thick and elusive as molecules in the air.

Since the swarm of ideas must approach infinite, how does one settle on one for each writing project?  Sometimes I come across the next intriguing subject while researching the current one.  But how did I jump from the American Revolution (Shadow Patriots) to the Mexican Revolution?  In the case of Last Train from Cuernavaca this is the photo from True West magazine that set the synapses to firing. The article in this issue of True West was about Pancho Villa.  He’s already famous, though, so I wasn’t interested in writing about him.  I wanted to know about the soldadas in this photograph.  (There’s some confusion about the terms soldada and soldadera.  I go with the soldada being a woman who goes into battle, and soldadera referring to a camp follower, one who supports the army in various ways). 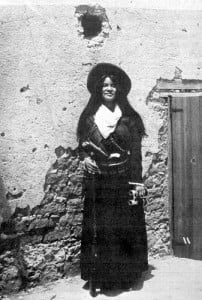 Curiosity about those women soldiers of the Mexican Revolution sent me looking for more information.  This photo was especially impressive because she’s holding binoculars.  Either the photographer was really good at faking reality with props, or the soldada intended to go into battle.

While casting about for a main character, I happened upon Angelina Jimenez, better known as Lt. Angel.   Dressed as a boy she joined General Emiliano Zapata’s forces at age fifteen.  Concealing her true identity, she fought alongside the men as one of them. This is not Lt. Angel, but I imagine her as being about this age.   She saw plenty of action in the Revolution, and was, in fact, given the rank of Lieutenant.  After she and her men stole weapons, blew up a train, and rescued comrades imprisoned on it, she rode north to join her father.  She, her father, and other officers were captured, imprisoned, and sentenced to death when a former ally betrayed them.  Angelina escaped from prison and made a perilous flight riding on the undercarriage of a train across hundreds of miles of rough terrain to the U.S. border where she crossed the river to safety.  Her account is a page-turner. 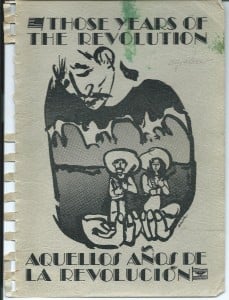 This is the original copy of the book in which I found her own account of her experiences in Mexico and her later life in San Jose, California.  First published in 1974, this bilingual collection of memoirs of the veterans of the Mexican Revolution came about because of Angelina Jimenez, called Teniente by those who knew her. I ordered a copy of the book, the last one I could find on-line.  When it arrived I discovered that Teniente had signed it.  That was one of those hackle-factor moments, when the past breathes down the back of your collar. 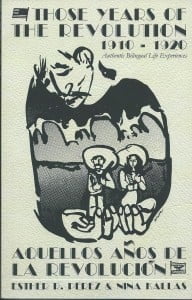 I treasure it so much I got permission to have it reprinted so it wouldn’t disappear from circulation. Those Years of the Revolution is now available on-line at amazon.com and elsewhere. 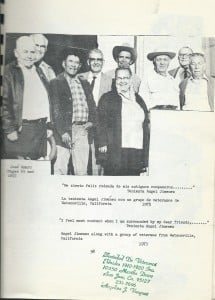 There are photos between the Spanish section at the front of the book and the English translation at the back.  Angelina poses there with former comrades-in-arms.

It wasn’t easy getting the men to participate.  The 1910-1920 warfare just south of the border had been troublesome and tumultuous.  The former revolutionaries didn’t want to risk being labeled bandidos.  Lt. Angel convinced them to record their memories though, and asked her stenographer friend, Esther Perez, to transcribe them.  Esther’s daughter, Nina Kallas, helped her mother translate them. I had lunch with Esther and Nina when I was in California a few years ago.  In talking about Teniente, Esther observed that in 1974, over fifty years after the war, the veterans still followed Angelina’s lead. 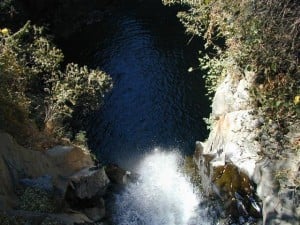 The landscape and terrain in Estado Morelos is spectacular.  Exploring the lush green gorges that run through and around Cuernavaca was one of the best aspects of researching the story. 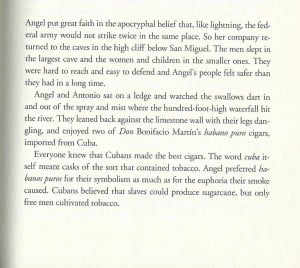 The photo above this excerpt is the gorge and the waterfall I had in mind when I wrote this scene in Chapter 43: “Thieves Smoking Cigars.”  If the waterfall pictured is not the one Lt. Angel and Antonio are enjoying in this scene, there are plenty more like it in the countryside where they ranged 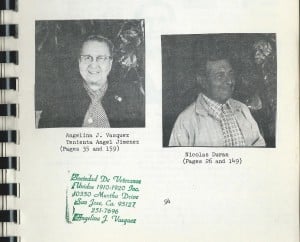 In Last Train from Cuernavaca, the fictional character of Lt. Angel and an equally imaginary Antonio fall in love.  In a case of life imitating fiction, Angelina and fellow veteran, Nicolas Duran, did fall in love and marry in San Jose five decades later. 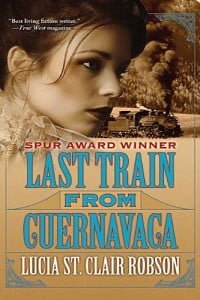 In the process of researching the Lt. Angel’s story, and more, I had the pleasure of spending time in the beautiful old city of Cuernavaca.  Each time I go back there I enjoy staying at Inn Cuernavaca, a B&B that’s an easy stroll from the main zocalo or plaza. 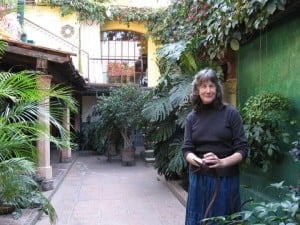