Cooking up a devilish story 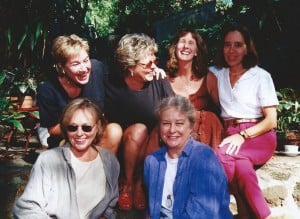 Meet my late, great next-door neighbor, Noni, on the far left, back row.   She fit this description of Faye, on page 20 of Devilish.

“Faye believed in seers and psychics, alien abductions and etheric forces.  She channeled a third century sage named Gundenis.  She conversed with angels, saw auras, practiced acupuncture, and read tarot cards.  She swore by pyramids, creative visualization, and the curative powers of prayer, crystals, prisms , and aromas.  Syl was right about one thing.  ‘Spook’ was a good name for her.”

Noni enjoyed telling her friends she was the inspiration for a character in my book about an incubus named Harry.   She had a lot of friends, five of whom are in this photo.  I just happened to wander next door in time for the picture, but the other four belonged to the group Noni called “The Amazing Graces.”   Once a month they met somewhere for lunch and read their poetry aloud.  Before they ate, Noni would lead them in singing “Amazing Grace.”

The Amazing Grace sitting between Noni and me is former neighbor, Ann McNutt.   The resident ghost in Ann’s house made an appearance in Last Train from Cuernavaca and a repeat performance as Nelly, the mischievous spirit in Devilish.   Noni herself hired an exorcist to shoo away the ghosts of three children she said she had seen in her basement.  She also told me she had channeled some creature from a long past millenium, but I forget its name.

Noni helped compile a community cookbook not long before she died.  The Cookbook Committee asked me to write a short history of our neighborhood and gave me a folder full of information that the History Committee had compiled.  Only a few hours ago did the irony of the last paragraph strike me.

Noni was the life of every party she threw.  She was the one who told me, at one neighborhood gathering, that an incubus had visited her.  I miss her. 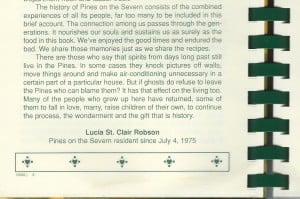 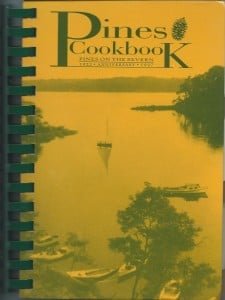 Thanks to Erik Arneson for the circa 1938 cover photo