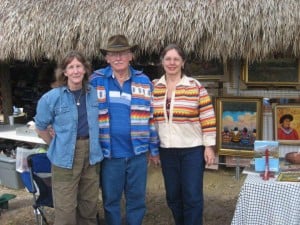 Florida artist Guy LaBree, his wife Pat, and I at the annual Seminole Rodeo and Field Day on the Brighton Reservation in Florida.

Twenty-five years ago I met the Barefoot Artist, Guy Labree, and his wife Pat at an outdoor exhibit of Seminole crafts, needlework, and art in Naples, Florida.  Guy was a third generation Floridian.  When he was a youngster, his Seminole friends would invite him to spend weekends in their villages deep in the Everglades.  Guy once told me the difference between an outside guest and someone accepted by the tribe.  Guests were treated with elaborate courtesy and escorted everywhere.  Guy, on the other hand, was allowed to roam unsupervised, entering any chickee he chose.

His detailed and accurate depictions of my home state’s native people and wildlife enchanted me, and I bought a painting then and there.  Over the years my collection of original LaBree’s has increased.  If I had to pick a favorite it would be “Cat Nap,” a Florida panther lying, with one foot dangling, on a live oak branch in a hardwood hammock.  My painting is “Cat Nap Two.”  This one is “Cat Nap One,” that Guy painted for his wife Pat. 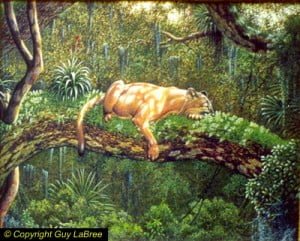 When Guy delivered a painting to my parents’ house in West Palm Beach, he was still barefoot.  After the Seminole Tribe asked him to create the art for their permanent exhibit in the new National Museum of the American Indian on the Mall in Washington, D.C., he and Pat were invited to attend the inaugural ceremonies.  I would bet that Guy was the only shoeless guest among all the notables there.  With Guy, being barefoot wasn’t a gimmick.  That was who he was.

For my third historical novel, I chose as a subject my childhood hero, Osceola.  His valiant people, the Seminoles, never surrendered to the U.S. government or signed a peace treaty.  Their story became Light a Distant Fire.  After it went out of print, I obtained the rights to it and had it reprinted.  For the new cover I chose Guy’s painting, “The Scouting Party,” that has hung on my wall and added class to my house for many years. 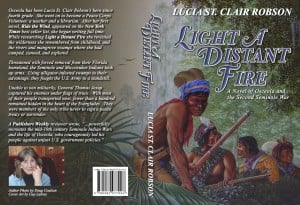 Guy LaBree died at the age of 73 in January of 2015.   He no longer paints in his studio in Arcadia, Florida.  He no longer brings to vibrant life the old Florida that I so loved and knew as a child.  But his talent and his gift from the heart remain without measure.