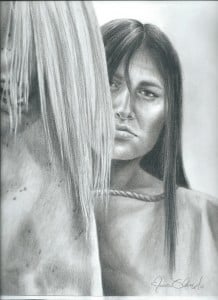 This is the very talented Maria D’Angelo’s portrait of Lozen, the Apache woman who rode as a warrior with the men in the second half of the 19th century.  Maria’s compelling image of her hangs in its frame on my wall and it impresses me every day.

The Apaches called themselves “Indeh,” the dead.   Their leader Cochise is quoted as saying, “Why is it that the Apaches want to die — that they carry their lives on their fingernails?  They roam over the hills and the plains and want the heavens to fall on them.”   That image of them as dead men fighting for their homeland inspired the title of my seventh novel — Ghost Warrior.

Lozen is the heroine of Ghost Warrior.  Her brother Victorio said of her, “My sister is my right hand.  Strong as a man, braver than most, and cunning in strategy, Lozen is a shield to her people.”

I’ve been researching people and events for thirty-six years now, and a thought occurred to me as I started writing this piece about Lozen.  It’s a thought that gives comfort in troubled times, and let’s face it, all times are troubled thanks to our species’ capacity for mischief and mayhem.

The thought is that even in the worst of situations, individuals with extraordinary strength of character appear and leave a legacy that persists.  How fortunate we are that other people made note of them and left a record for the rest of us.

The Apache Wars certainly qualified as the worst of times.  Many of the names of the leaders who waged those battles against overwhelming odds are familiar –Cochise, Victorio, Geronimo, Mangas Coloradas.  Lozen was as exceptional as any of them.  One Apache I spoke to called her their “Joan of Arc.”

Reading and writing about what Lozen and her people endured puts my petty problems into stark perspective.  It strikes me as astounding that someone who died over 120 years ago can influence how I think and feel now. 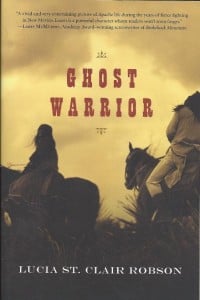