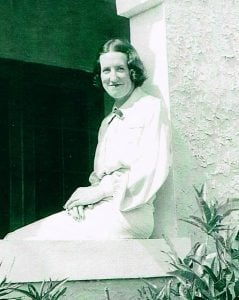 My Aunt Sue passed away and left me a piece of her mind, or rather several thousand pieces of her mind.  The 13,530 pages of her 1950 edition of  the New Funk and Wagnalls Encyclopedia, in thirty-six volumes, cover subjects from A to ZYZN. 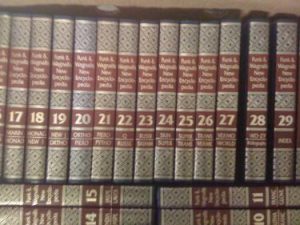 Aunt Sue’s Funk and Wagnalls is not just any collection of out-dated reference tomes.  My aunt, who was in all other respects a paragon of southern gentility, broke one of civilized society’s most basic rules: she wrote in those books. 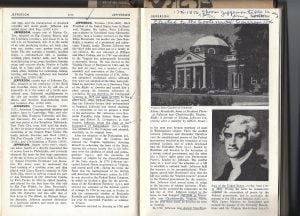 For forty years, in reckless blue ballpoint, she underlined sentences and added comments in the margins.  She wrote on used envelopes and inserted them in their alphabetically-correct places.   The books also bristle with travel folders and magazine and newspaper articles.

The pages are numbered consecutively from 1 to 13,530.  The pair of pages 4074 and 4075 are stained a lovely sepia tone from the half dozen newspaper clippings on the solar eclipse of March 1970. Aunt Sue underlined all those newspaper articles in blue ink, including one with the headline, “Where will you be when the lights go out?”

Over the years I’ve come to admire the brilliance of my father’s older sister’s filing system.  She understood that she didn’t have to know all the answers, she just had to know where to find them.  And Aunt Sue obviously was in search of answers.  Almost fifty years before the internet, she created  her own interactive search engine with that solemn rank of books in their plain gray covers.

Aunt Sue was the biscotti in a box of Florida Crackers.  Of Dad’s seven siblings, only she chose to live among Yankees in the far north country of Washington, D.C.  The gentleman with her in this photo, by the way, is my father.

And she did persuade Raymond, another of her siblings, to cut loose at least once, as I recently discovered when I found this photo of Sue and Ray and their spouses in Tiajuana, Mexico.  The zebra is a mule with a customized paint job. 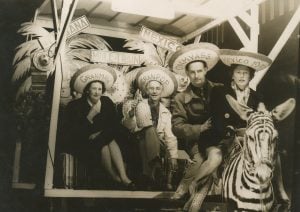 But generally speaking, while the rest of the family was content to winter, spring, summer, and fall in Miami, Aunt Sue sent them photos of herself perched atop a camel in Egypt.  When I moved to Maryland, I became acquainted with the young woman on the ship-of-the-desert. By then her youth, her camel-cruising days, and her short-term memory were behind her, but I’ve come to know her better since she’s been gone. Whenever I open a volume of her Funk and Wagnalls  I encounter her indigo thoughts. 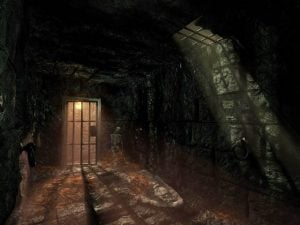 Her interests were eclectic.  In Volume 22 she underlined articles on Malta, Mamba, Mamertine Prison, and Mammals.  Mamertine Prison?  If I ever happen to attend a séance and Aunt Sue appears, I will ask her why she was interested in a medieval dungeon where prisoners were lowered through a hole in the floor above.

The Cold War must have been still warm for her when she noted on the entry for Russia, “Russians are merrier drinking.  To have a proper binge requires three days: 1 to drink, 2 to be drunk, and 3 to sober up.”

She saved instructions for everything from faceting diamonds to selecting fever thermometers. She underlined an extensive article on lower back pain.  Who goes to an encyclopedia for relief from back pain? 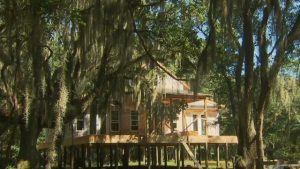 Colonel’s Island
Funk and Wagnalls also served as a genealogical resource and an inventory of lost family legacies.  In the margins around Belfast she wrote, “Grandfather Woodside lived in Belfast.” She had inserted an article about Jekyll Island, and added, “We lived on Colonel’s Island, about 25 miles from Jekyll Island. 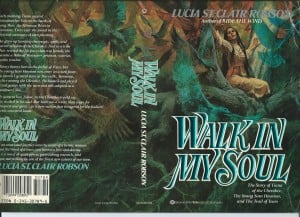 She added subjects that Isaac Funk and his college chum Adam Willis Wagnalls had omitted.  In one case she noted that “Sam Houston married an Indian girl” to the piece on Texas’s president.  Her comment showed that she knew about Tiana Rogers, heroine of my book Walk in My Soul, before I did.

Funk and Wagnalls left out Sanibel Island too, but not to worry.  Aunt Sue inserted a magazine article and wrote “I have a little jar of shells from Sanibel.”  That comment made me wonder.  Aunt Sue knew she had a jar of Sanibel shells, so why did she write it down?  Did she leave her notes to be found after she was gone?  Or as her memory failed, had the encyclopedias become her water wings in a sea of forgetfulness? Yesterday when I took out volume XI to look up “dragoman,” I found a magazine article on dragonflies..  I was surprised to discover that I had put it there.  I was more surprised to realize that I’d forgotten I’d done it.