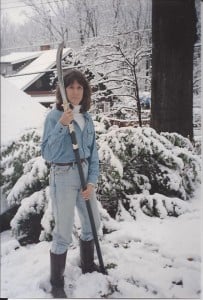 My guy, Brian, knew what to buy for a girl.  While I was writing The Tokaido Road he did some research of his own, and found Mr. Kiyota’s martial arts store on Charles Street in Baltimore.   http://www.kiyotacompany.com/  For Christmas that year this six-foot halberd called a naginata was under the tree.  (Now that I think of it, I wonder how he got it into his ’74 Corvette.  He couldn’t very well have driven home with it sticking out of the T-top on the passenger side.)

I decided to take it with me on a TOKAIDO book tour to California in 1991.  Security wasn’t as strict then, but how to get it through airports?  This naginata is designed to come apart at the middle of the shaft so Brian suggested carrying it in a fishing rod case.   When asked at the check-in counter what the tall, black, cylindrical hard-case contained, I said “Sporting equipment.” 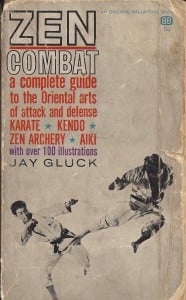 When I started writing about Japan’s most famous historical event, the revenge of the 47 ronin, Brian said I needed to include lots of “guy stuff.” He handed me his tattered paperback copy of Jay Gluck’s book, Zen Combat.  I opened it at random, read a few lines, and started laughing.  He asked what was so funny.  “Have you ever heard of Shiri-sumo, buttocks wrestling?”  I read him the description of the game which involves a lot of sake, two guys wearing cotton kimonos and nothing else, and giggling courtesans egging them on.  It’s the illustration in the lower right hand corner of the photo below here.  Gluck labeled it and similar games “Cocktail Karate.”  Clicking on the image should enlarge it enough to read. 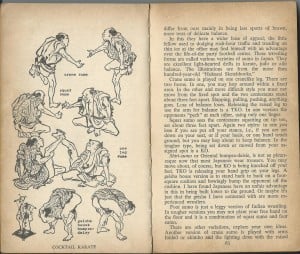 Brian said, “Only you could open a serious book on martial arts directly to the paragraph on butt wrestling.”  I modestly replied, “It’s a gift.”

Jay Gluck didn’t include the Japanese combo of strip poker and musical chairs called “Naked Islanders,” but I opened TOKAIDO with it. 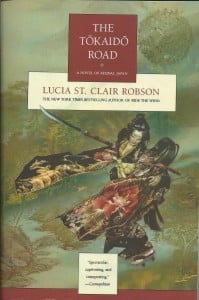 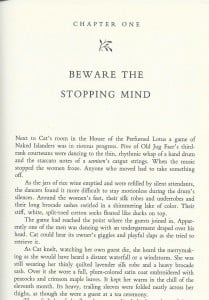 A footnote: when I was on a Smithsonian jungle tour in Costa Rica our guide discovered that I’d written Tokaido Road.  Turns out he’d read it.  What are the odds?  Trying to contain his excitement he asked what kind of knot Hanshiro tied in Cat’s sash in the scene under the bridge.   Imagine his disappointment I told him I had made it up.   Although after researching the Japanese in 1702, I feel fairly certain they had devised an actual “love” knot. 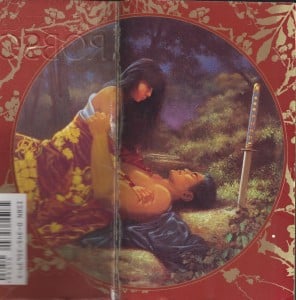 This is the inside of the double cover on the small paperback version.  It depicts the scene the tour guide was asking about.  I found the artist and now have the original.

The dedication in TOKAIDO reads:  “For Brian, my companion on the Road.”   The naginata still stands guard, inside its fishing rod case, in my clothes closet. 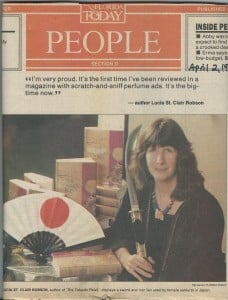 Brian also gave me the iron fighting fan on display in this photo, and the necklace I’m wearing.