Fiction as Autobiography: Chapter One 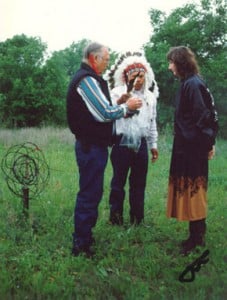 When trying to imagine the experiences of dead and imaginary individuals from times long past, reference books can go only so far.  I have to get off the academic bus and strike out into my own malpais of memories.
That isn’t as far fetched as it seems.  True, our attitudes are influenced by the society in which we live, so how can I possibly know the feelings and thoughts of people of other cultures?  The short answer is, I can’t.  However, the amygdala, located in the most primitive area of our brains, only contains five emotions — anger, fear, pleasure, sadness and disgust, the same number for every human.  http://www.neuroanatomy.wisc.edu/coursebook/neuro5(2).pdf  Disgust as an emotion rather fascinates me… who knew that went back so far and down so deep?  But I digress. 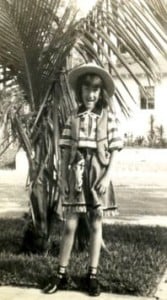 By writing about people facing extreme peril and suffering great hardships, maybe I’m trying to make restitution for my own cozy Karma.  I had a happy childhood in a small town in a subtropical climate with wonderful parents and terrific siblings.  But I keep going back to those five basic emotions that we all share.  I am putting my words into dead people’s mouths, after all.  If my characters are still around Out There, I hope I haven’t embarrassed them or ticked them off by misrepresenting them.  This was particularly true of that first attempt at fiction, Ride the Wind.

The illustration above is of Adobe Walls.  I wrote about it in this excerpt from the essay “The Wraith Riding Shotgun,” in the anthology, Forever Texas.  It was one stop on the three-thousand-mile trip through Texas as research for Ride the Wind.  The full essay can be found at  https://www.luciastclairrobson.com/the-texas-connection/
“North of Amarillo I followed a ranch road to the site of the buffalo hunters’ camp at Adobe Walls.  That’s where Billy  Dixon made his legendary one-mile shot at an army of Comanches and Kiowa willing to barber him and his friends by taking some off the top.  Two monuments stood there at the base of hills carpeted in flowers and with a magnificent view of the Canadian River threading through the plain far below. A coyote passed silently into the tall grass, as indifferent to my presence as any big-city dweller.
That’s where I first experienced the Hackle Factor.  The hair on the nape of my neck stirred as though in an ancient  and phantom wind.” 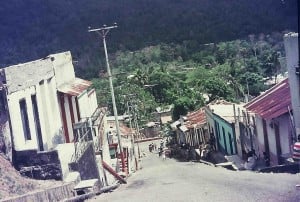 When writing the chapter where Cynthia Ann awoke in a tipi in the Comanche camp that first morning, I harked back to my own experience in the Peace Corps.  I think my house is the one with the red metal roof on the right in the above photo.  The street is called Vuelvan Caras in the barrio of Los Cerritos in the small town of Caripito, Venezuela.  True, my family had not been slaughtered, nor had I arrived in Caripito riding behind one of the killers on the back of a pony.  But when writing the scene, I remembered feeling separated from home and everything familiar and unable to understand the language being spoken in the street just outside the glass-less window. 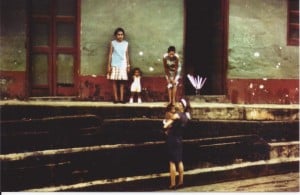 When describing the mourning of one of the characters after the love of her life was killed in a raid, I remembered the unearthly keening of a neighbor, a young mother whose baby had just died.  The houses along each side of the street were all joined together.  There was open space between the tops of the interior walls and the metal sheets that formed the peaked roofs, so we heard the goings-on in those on each side of ours.
Not only was the intensity of the young mother’s sorrow like nothing I had heard before, but it seemed to emanate from within my own house.  I figured that probably was true of tipis also.  In writing Ride the Wind, that mourning scene may have been the easiest to describe, even though I myself had yet to experience such a loss and its intense grief. 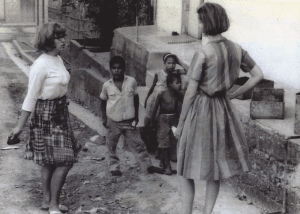 After living in Los Cerritos for several months I stood in the middle of the quiet street after everyone had gone to sleep, and came to three realizations:
1)  One day I had suddenly understood the shouts and conversations of the boys playing softball just outside in the steeply sloping street.
2)  I knew all my neighbors and each family’s situation, even what radio station they listened to.  (Not surprising.  Every morning radios came on, loud, up and down Vuelvan Caras).
3) This barrio had become home, just as the Comanche village must have become home to the nine-year-old child, Cynthia Ann Parker.

Note: I had planned to give autobiographical connections here for each book I’ve written, but as usual, this has run long.  So it will be the first article, with the autobiographical aspects of my other novels to follow. 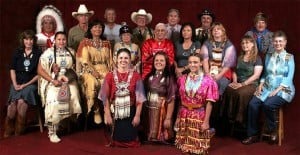 I’ll end with an explanation of that first photograph of Monroe Tahmahkera, a grandson of Quanah Parker, at a blessing ceremony outside of Crowell, Texas.  I met the Tahmahkeras there at a weekend celebration called Cynthia Ann Parker Days, four or five years after Ride the Wind came out.   That began a host of experiences with Quanah’s descendants that are now a treasured part of my memory bank.  The family portrait above was taken at a Cowboy Symposium in Lubbock, Texas, where many of the Parkers gathered.  They invited me to join them in the photo.