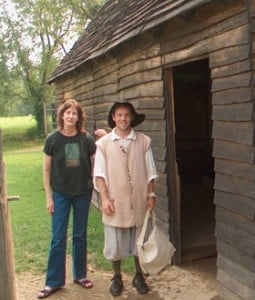 When one stops to think about it, writing and reading are preposterous endeavors.   With straight lines of rune-like ink squiggles, the writer creates landscapes, events, emotions, and personalities.  Readers who most likely have never met the writer, then visualize those images.

Bringing all the human senses– sight, hearing, taste, touch, and smell— into the writing process makes that sort of mind meld possible.  Of the five, smell is the oldest and most evocative.  A study done by researchers at Rockefeller University found that the human nose can detect one trillion distinct scents.  Even if they’re off by a few million, that’s impressive.

As part of the limbic system, smell is located front and center in the primitive part of the brain, along with memory and emotion.   You may have had the experience of an odor bringing up a brief but intense image of something from your past.   For instance, dusty carpets and grandmothers’ houses often are mentioned as olfactory memory connections.   Opening a bottle of sunscreen once propelled me back to  Puerto Escondido, Mexico.  Alas, the scent only got me into the drugstore where I had bought lotion, and not onto the beach. 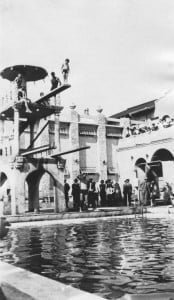 I had better luck with the smell of Clorox.  It sent me back fifty years to the salt water pool across from the public beach in Lake Worth, Florida. (Seen in the photo above).  They must have spiked the pool with chlorine as a disinfectant.  When I opened the Clorox bottle I felt, for a few seconds, the sun and the salt drying on my arms.  I heard the laughter and splashing of the other kids.

I’ve only taken that bleach-induced micro-trip to the Lake Worth Casino Pool one time, but I’ll never forget it.

Conveniently for the writer of historical fiction, the past was smelly.  Really smelly, which gives plenty of opportunities to engage the reader’s olfactory super-power.  While researching Mary’s Land, I discovered that the English who settled Lord Baltimore’s colony considered bathing unhealthy.  They thought the oil in their skin protected them from disease.   It’s recorded that King James II never bathed, and he developed a waxy surface.  I imagine his servants giving his carnauba finish a good buffing with a clean soft cloth. 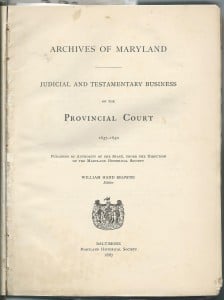 While I was researching Mary’s Land, the folks at the Maryland Archives cheerfully sold me a copy of this over-sized, 569-page book with thirteen years of Provincial Court records transcribed and indexed.  It contains detailed lists of the goods and chattel, every pewter spoon and porridge bowl, left in wills, but nowhere are chamber pots mentioned, nor privies.

I can understand the lack of privies.  Who would want to go out after dark into a wilderness full of bears, wolves, panthers, and a variety of supernatural critters?  When I asked a historian about the lack of chamber pots she said, “You could grow anything in the dooryards.”  Why?  People relieved themselves there, making the soil well fertilized.

In putting together a glossary of 17th-century words for body parts, bodily functions, and epithets, my favorite term for human excrement (separating it, perhaps, from feces of a lower ilk), is “sir reverence.”  Folks back then considered stepping in sir-reverence to be fortuitous, or as they put it, “Shitten luck is good luck.”

The term was also used as a unit of measure: “as far as a pig can smell a sir-reverence.”  And a “flying pasty” was sir-reverence wrapped in paper and thrown over a neighbor’s wall.

Speaking of sanitation, don’t get me started on lice.  They were so thick aboard ship, a walk across the deck was accompanied by the sound of them crunching underfoot.  They were referred to as “black cattle,” “a gentleman’s companion,” or “Scotch grays.” 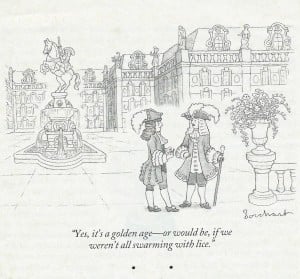 Thomas Becket was murdered in December of 1170. For the viewing in the Cathedral, he was laid out in the nine layers of clothing he had worn when alive.  As the corpse cooled, the top layer of clothes began to shimmer and quake with thousands of lice and fleas coming to the surface.  Mourners in the front rows rushed to get out of the way before they inherited Becket’s extensive herd of black cattle. 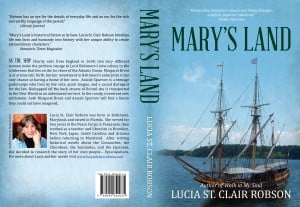 Thomas Becket lived almost 500 years before the settlement of Maryland, but half a millennium had not improved sanitary conditions by the 17th century.  My favorite comment about Mary’s Land is from a reader who said that after finishing each chapter he wanted to take a shower.

To me, it’s a successful collection of lines of ink squiggles that can take the reader back that far and that deep into another time and place altogether.

And a note about this photo: I had named the local pub Smythe’s Ordinary before I visited the re-creation of St. Mary’s City.  Imagine my surprise when I drove down there and discovered that the tavern, seen in the picture, was named Smith’s.