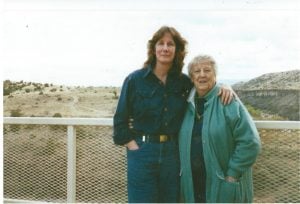 This photo was taken of Mom and me 20 years ago on a trip to Arizona. 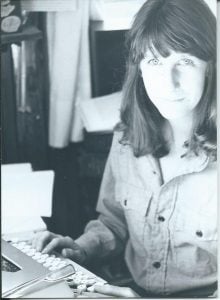 In 1980, due to circumstances beyond my most improbable fantasies, I had a publisher’s contract to produce what turned out to be an 860-page manuscript written on a manual, portable Smith Corona typewriter.  Said manuscript was to be delivered within 18-months.
The only hitch, other than the fact that I hadn’t a clue as to how to write a book, was that I already had a job. 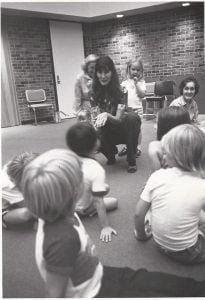 I worked on the saga of Cynthia Ann Parker and the Comanches evenings and every other weekend when I wasn’t at my full-time job as a librarian.  (However, I must confess I did some research at work, sending off bundles of inter-library loan slips on the subjects of Comanches, Texas, weapons, and everything anyone could possibly want to know about buffalos.
Our local libraries, by the way, have a terrific inter-library loan service.  Rare books came from such far-away and obscure sources that as a librarian, I was appalled.  I remember looking at one musty, irreplaceable old tome sent from somewhere in Ohio and wondering what they were thinking, sending such a valuable book to a complete stranger hundreds of miles away. 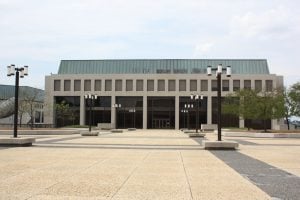 During my off-hours I haunted the Library of Congress in Washington, D.C. and the U.S. Naval Academy’s library located two miles from home.  I also visited the Ethnology Library on the fourth floor of the Smithsonian’s Museum of Natural History.  The fourth floor is not open to the general public and obtaining permission to go there was my first experience with the magic of the word “writer” to gain access to places generally off-limits. 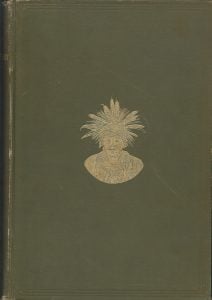 Not only did the Natural History Museum’s fourth-floor library have the weighty tomes of annual ethnology reports, but they had extra copies to sell.
Also on the fourth floor, the vast overflow of museum artifacts were stored in tall white metal cabinets lining both sides of the maze of hallways.  A curator opened several wide, shallow drawers containing Comanche artifacts collected by the French ethnologist, Berlandier in the early 1800’s. He pulled a rolling table over and invited me to take things out for a closer look.  Then he left me to admire what the Comanche people had made and used and worn 150 years earlier.

So what does all that have to do with the Dark Side and my mother? 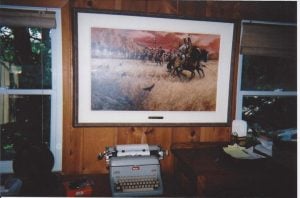 In 1980, on a visit to Ballantine offices in NYC, my editor, Pam Strickler, took me to the art department where artist Tom Hall’s two-foot by three-foot painting sat on the floor and leaned against a desk. It was stunning, and yet I fretted.
I was ignorant of how rare it was for a neophyte to be given a contract based on six chapters, and then have a painting commissioned for the cover.  I worried that the scene gave no hint of the horrific events inside. 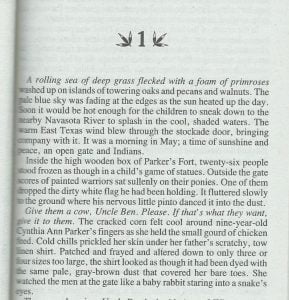 I imagined men would think it a bodice-ripper and pass on it.  I worried that women would expect a feel-good love story, only to get hit with a massacre, and then more of them.
So yes, I did worry about what my mother would think, but I worried more about what the Comanches, particularly Quanah Parker’s descendants, would think.  I even called Ballantine’s legal department to ask if they could sue me.
I had no way of knowing, then, the breadth of Quanah’s descendants’ understanding and the depth of their kindness. 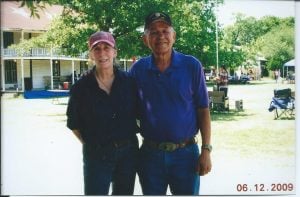 Years later, I asked Quanah Parker’s great grandson, Ron, if the family would like the cover changed on the recorded edition.  He emailed that he’d ask the Elders and get back to me.  Within the hour, he reported that the decision was unanimous.  They wanted the original cover. 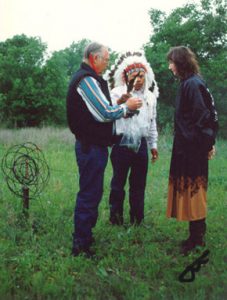 In the mid-eighties, I was invited to a Cynthia Ann Parker Days celebration in Crowell, Texas.  That’s where I met Monroe Tahamahkera, one of Quanah’s grandsons. The Tahmahkeras invited me to a blessing ceremony conducted by Monroe near where Cynthia Ann is believed to have been re-captured.  (We had to climb over some fences to get there).
I’ve met many of Quanah Parker’s descendants since then, and knowing them is an honor and a privilege I cherish.  They and their story have changed my life fundamentally.

Postscript:   A recent email inspired me to write this piece about the dark side of history.  The writer recognized what I try to accomplish in all my novels, and gave me permission to post this:
Hi Lucia,
I’m brand new to your books, and just finished Ride the Wind. I know how hard writing can be (I am married to an author of young adult fiction), and wanted to thank you especially for two aspects of your work in particular:
Firstly, that you wrote unflinchingly about the cruelty on both sides. Too often the history we read is only that of the victors, and I felt moved by both the cruelty and the humanity of the People as you described them. Bringing them to life and then imbuing them with the rich components of light and dark which inhabit us all made the difference between a good book and a great book to this reader.
Secondly, as I tip-toed across the internet learning more about your work, I came across a recent comment in which you described our convict heritage. Despite the manifest strengths of our country, it appears that with age we have become more brittle in our willingness to acknowledge less appealing aspects of our history. I believe we are poorer for that, and appreciate your bringing it up directly.