“The Dragon’s Wing, the Magic Ring” 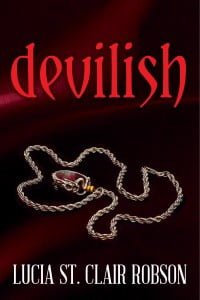 About the ring on the cover of Devilish: a dragon eating its own tail is called Ouroboros.  It’s a symbol of eternity that goes back at least 3,000 years.  That was when, as explained in the Wikipedia excerpt posted below,  it first appeared in an Egyptian text. 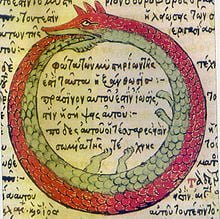 “The first known appearance of the Ouroboros motif is in the Enigmatic Book of the Netherworld, an ancient Egyptian funerary text in the tomb of Tutankhamun, in the 14th century B.C. The text concerns the actions of the god Ra and his union with Osiris in the underworld. In an illustration from this text, two serpents, holding their tails in their mouths, coil around the head and feet of an enormous god, who may represent the unified Ra-Osiris.  Both serpents are manifestations of the deity Mehen, who in other funerary texts protects Ra in his underworld journey. The whole divine figure represents the beginning and the end of time.” 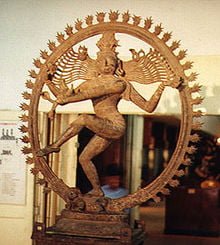 For Hindus of India, Ouroboros often is shown in the form of a snake surrounding Shiva.  Shiva represents both creation and destruction, birth and death.  (Carl Jung, not surprising, also found phallic connotations in it). The symbol or sigil of the dragon eating its tail is also found in the mythology of Greece, and in Norse tales.
Why did I choose a ring shaped like a dragon for the cover of Devilish?  Here’s part of the answer. 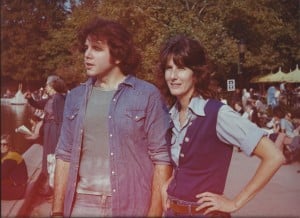 Writer Brian Daley’s cousin, Cathy Burke, took this photo of Brian and me in Central Park in 1979.  Five years later, it had become evident we were going to be together from then on.  One day Brian commented that it would be good to have something tangible to represent that.   We decided on rings. 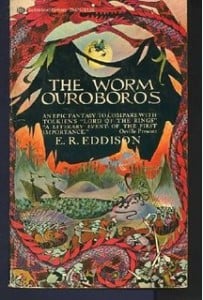 I had seen the novel pictured above in Brian’s very large collection of books.  I hadn’t read it, but Brian had told me the meaning behind the dragon on the cover.  A silversmith created the rings using the ancient symbol of eternity. 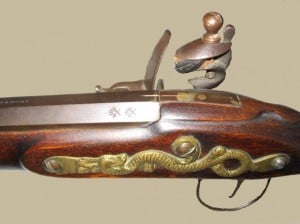 The dragon represented not only Brian’s genre of fantasy, but it had relevance for me too.   My first novel, Ride the Wind, had come out three years before.  While researching it, one of the details I uncovered was that the Plains Indians preferred a certain trade gun.   It was typically light, often small and easy to handle.  It could fire shot, about 20 gauge, or a patched ball of about .62 calibre.  But what made it meaningful for me, and apparently for the Indians too, was the gun’s trademark— a brass dragon or sea serpent used as a side screwplate.

Thirty years ago there was no internet to explore, so the dragon on Eddison’s book cover was the only source of inspiration.  It’s fun now to google Ouroboros and find lots of images and information.  This site was particularly informative about the novel, The Worm Ouroboros.                 http://www.theguardian.com/books/booksblog/2009/oct/02/fantasy-worm-ouroboros-eddison

What I learned from the website is that Eddison wrote the entire book in Elizabethan-style prose.  I used early 17th-century vocabulary and syntax in Mary’s Land, but only for the dialogue.  I’m trying to imagine writing both narrative and dialogue that way.  Gads. 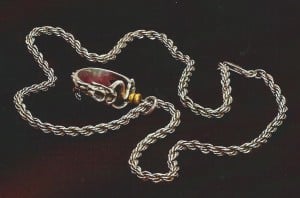 Brian’s ring is the one on the cover.  Two of my fingers fit into it, down to the first knuckle anyway.

I wrote a rough draft of Devilish in 1997, about a year after Brian died.  It’s based on my next door neighbor’s casual  claim that an incubus had visited her.  Back then the first draft was not, as they say, ready for prime time, so I shelved it  for seventeen years.  Re-writing and putting it into print meant I could cross off the major item on a very old to-do list. 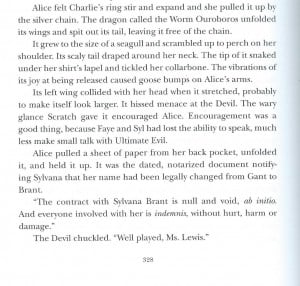 All of this doesn’t completely answer the original question of why the Ouroboros ring is on the cover of the book:
The ring is there because it’s one of the characters.   A cameo role, for sure, but an important one.  It makes its first move in Chapter One: “Dancing in the DMZ.”

This cartoon was in today’s (Sunday’s) comics.  Why did I include it?  The Devil made me do it.  And its appearance in the funny pages the day I was writing this piece was one of those coincidences that happen so often.

For the curious: here’s the rest of William Wordsworth’s verse:
The dragon’s wing, the magic ring,
I shall not covet for my dower.
If I along the lonely way
With sympathetic heart may stray,
And with a soul of power.

These given, what more need I desire
To stir, to soothe, or elevate?
What nobler marvels than the mind
May in life’s daily prospect find.
May find or there create?

(Don’t ask me to explain it.  I’m merely the messenger).