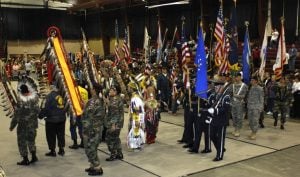 “American Indians Serve in the U.S. Military in Greater Numbers Than Any Other Ethnic Group”

That Huffington Post headline did not surprise me.   Every Indian pow wow I’ve attended has begun with a color guard of military veterans leading the dancers in the Grand Entry.   All the pow wows I’ve witnessed also have included dances honoring veterans and those currently serving in the military.

My first experience at a Comanche gathering was what my Comanche friends called a “homecoming.”  It was held in a grove of trees on the outskirts of a small town in Oklahoma, a few miles north of the Texas line.  Probably not more than a hundred people participated, if that many.  People had brought tents, campers, even some tipis.  They cooked over open fires or on grills.  Their horses grazed under the trees.  Drumming and dancing went on in a cleared, sandy area. That weekend transported me back in time.  Take away the pick-up trucks and the horse trailers and the scene seemed like an Indian encampment 100 years ago.  (I didn’t have a camera with me, and doubt I would have used it if I had, so I’ve substituted an historical pair of pictures) 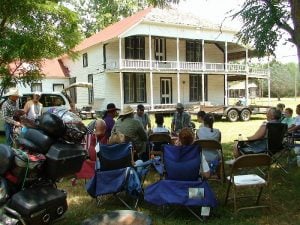 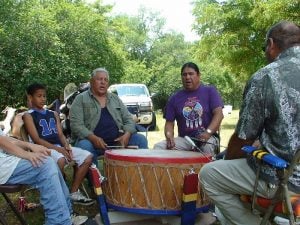 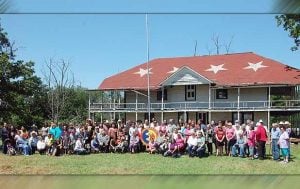 Later on I was privileged to attend a reunion of Quanah Parker descendants at the Star House outside of Cache, Oklahoma.  This link is to a video of that weekend’s Grand Entry.  As always, the dignitaries and dancers were led by a color guard of veterans.   https://www.youtube.com/watch?v=wwqcoLTFBEQ
And as always, they invited everyone who had served or was serving in the military to join in the dance dedicated to them.  They insisted, for instance, that my brother-in-law who served in the Navy, join the circle, slow-stepping to the beat of the drums. 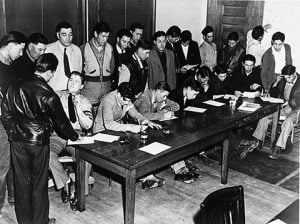 This photo is of twenty-two Sioux from Crow Creek Reservation enlisting in the Army, even though they were not allowed to vote in this country.  Not until the passage of the Voting Rights Act of 1965 were all states required to allow Native Americans to vote.
When President Woodrow Wilson declared a draft in 1914 at the start of World War I, American Indians were not eligible for the draft because they weren’t considered citizens of the United States. However some 12,000 volunteered for military service in that war anyway. 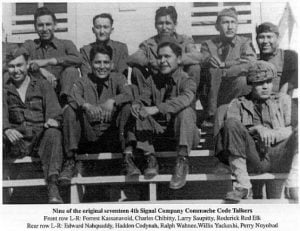 Napoleon once said, “The secret of war lies in the communications.”  In World Wars I and II American Indians with their own languages and dialects, most of which were not written down, proved ideal.
In France during WWI, the 142nd Infantry Regiment, 36th Division, had a company of Indians who spoke twenty-six languages and dialects.  Two Indian officers supervised a communications system staffed by eighteen Choctaw.  Soldiers from other tribes participated, including Cheyenne, Comanche, Cherokee, Osage and Yankton Sioux.  Before they arrived in France, The Germans had broken every American code, but they never broke the Indians’ “code.”  Those soldiers became known as “code talkers.”  To read more about them, check out: https://www.army.mil/americanindians/code_talkers.html 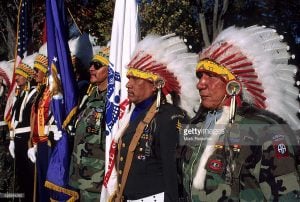 In 2002, Congress passed the Codetalkers Recognition Act, acknowledging their extraordinary achievements, in spite of discrimination against them.  The act states that at “…a time when Indians were discouraged from practicing their native culture, a few brave men used their cultural heritage, their language, to help change the course of history.” 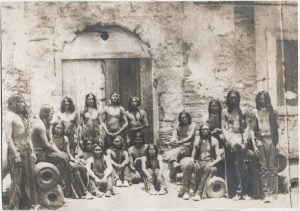 Even now, as the Huffington Post pointed out, American Indians serve in the military in greater numbers per capita than any ethnic group.  American Indian men and women have served with distinction for over 200 years.  All this in spite of a long history of the U.S. Government taking their lands, relocating them to the poorest parts of the country, restricting them, and even imprisoning those who resisted. 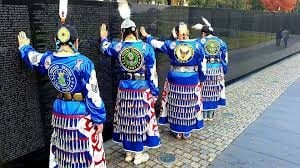 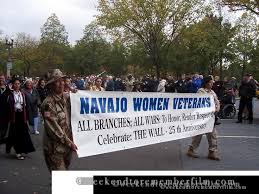 William C. Triplett wrote:  “42,000 Native Americans – one in eight – served in Vietnam, the highest per capita rate of any ethnic group in the United States.  In turn, Native Americans suffered the highest per capita rate of wounded and killed.  But in Washington, D.C. – the city of monuments and memorials – nowhere is there anything commemorating the service and sacrifice of the country’s original inhabitants.”
I challenge you to stay dry-eyed while you listen to this.

And here’s a moving video featuring some of those who served.  https://www.youtube.com/watch?v=617_3PxKEOk