The Etiquette of Ashes 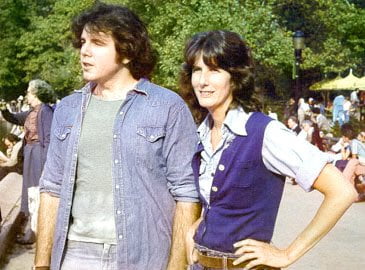 Lucia with Brian Daley in Central Park in 1979. Many thanks to Steve Cromwell for restoring this photo taken by Brian’s cousin, Kathy Burke.

My late husband’s niece said she would like to have some of her uncle’s ashes. It was a simple request. The remains of Brian Daley’s remains that haven’t been buried or scattered are appropriately stored. All I have to do is ladle some gray grit out of a large beer stein, a souvenir of Brian’s tour of duty with the U.S. Army in Berlin in the early 1970’s.

But questions of etiquette arise.

Do I employ the same blue plastic scoop that I use to fill the birdfeeder? Is it respectful to dump his mortal remains into one of the zippered plastic bags used to keep sandwiches fresh? They’re perfect for the task, but I’ve noticed that TV commercials do not recommend them for storing human leftovers.

Do I include the ashes in the same envelope as the information about summer camps that I’m sending to Brian’s niece? No. I decide that the incinerated debris of our loved one’s flesh and bones deserves the minimal respect of separate packaging.

The wording of the note I include is important too. Shortly after Brian’s death I sent a plastic bag of ashes to his mother, along with an explanation of what they were. Before she saw the note she assumed the bag contained a protein supplement of the sort her doctor had recommended. Fortunately, a relative found my letter before Brian’s mom tried to dissolve her son in milk and drink him.

The problem of the etiquette of ashes first surfaced when I visited Brian at the funeral home. He was resting comfortably under a sheet on a gurney in the basement. Nearby loomed a display case filled with cinerary urns — fake Roman amphoras, Chinese vases, garish turquoise dolphins leaping over resin rocks.

The love of my life had been dead all of eight hours, but Brian was about laughter. I grabbed his big toe and shook it to call his attention back from wherever his soul had wandered.
“Brian,” I said. “Which one of these do you want to spend eternity in?”

The beer stein has proved the perfect container. Brian didn’t talk much about his tour of duty in Vietnam with the 11th Cavalry. He preferred to reminisce about his two years in Berlin. He could do more than carry a tune, he could sing harmony. Local beer hall patrons were happy to buy the American G.I.’s rounds of lager as long as they kept singing. I haven’t heard “Under the Boardwalk” emanating from the stein yet, but I wouldn’t be surprised if it did.

Actually, the etiquette of Brian’s ashes came as an afterthought. First I had to overcome the creepy realization that he was now in a very different form from the big, solid, hilarious guy with whom I had shared a life. When a friend suggested I keep some of his ashes apart for myself, I knew what the container should be. I asked that a small amount be put in a square metal box with a portrait of Harrison Ford as Han Solo on the lid.

Brian wrote the first three Han Solo novels. He also adapted the three original Star Wars movies for National Public Radio. During taping of the shows, Mark Hamill, aka Luke Skywalker, gave him the metal box as a keepsake.

I drove past the funeral home twice before mustering the nerve to go in and collect Brian’s remains. I put the surprisingly heavy carton of them on the passenger seat, but ashes fell out through the hinge on the small box. They scattered across my lap and onto the floor of the car.

I was faced with the first dilemma of proper cremains procedure. Do I retrieve the whiskbroom and sweep the ashes out into the parking lot? Do I try to put them, along with a lot of dirt, back into the box? Or do I brush them off my clothes and drive away? Imagining this as one of Brian’s jokes, I chuckled and opted for the third solution.

Someone was putting together a website devoted to Science Fiction authors’ gravesites, and he asked me where Brian was buried. I told him that B’s friends and family have scattered his ashes all over the planet. A bit of Brian has wafted from the peak of Huaina Picchu in Peru. He swims in the river that runs through the Mayan ruins at Palenque. He keeps company with other soldiers at the chapel dedicated to Vietnam War veterans in Angel Fire, NM.

Some of his ashes share his mother’s coffin next to his father in a cemetery in Paramus, NJ. He resides in Canyon deChelly, AZ,in the Chesapeake Bay, a river in New Hampshire, a back yard in New Jersey, a front yard in Maryland, in an old U.S. Army building in Berlin, Germany, and in a film canister in the pocket of one of his fatigue shirts displayed in the living room of an army buddy.

A friend requested some of his cremains to scatter in an unusual place. In 2003, a memorial to the Indian combatants was added at the site of the Little Bighorn Battlefield National Monument. Its designers included a stone opening as a Spirit Gate to welcome the dead, both Indian and Anglo. Members of some tribes feel that the existence of such a doorway poses a danger to this world.

They asked my friend to put dust from a grave in the portal to seal it shut and protect our earthly plane. The friend, who has read Brian’s books, thinks Brian would accept the “challenge and the duty of protecting our world from an inter-dimensional rift.” He could be right. Brian had a soldier’s heart.
As my friend put it, “Brian will help to guard the portal and keep anything bad from happening.” He went on to say, “Brian has the hard work… I just have to drive to Montana.”
Brian’s friends and family like to say that he is adventuring in a galaxy far, far away. Sending the rest of the beer stein’s contents up with a NASA launch would be ideal. In the meantime, I ponder the plastic bag as a fitting receptacle to mail to his niece.