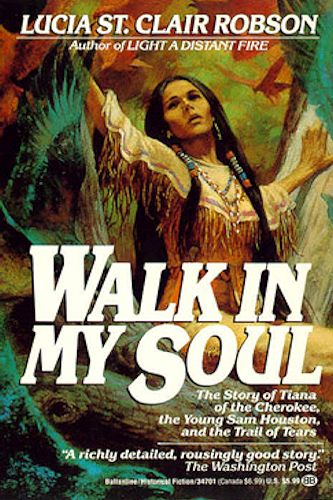 Walk In My Soul

This is the story of Tiana Rogers of the Cherokee, the young Sam Houston, and the Trail of Tears.

Tiana grew up learning the magic, spells, and nature religion of the Cherokee. And in a tribe that revered the life force that was female, she became a Beloved Woman—priestess, warrior, healer, teacher.

History knows him as the father of Texas, but the young Sam Houston ran away on a lark from his family’s general store in Maryville, Tennessee, to live among the Cherokee. He hunted and played ritual games with the men and was adopted as a headman’s son and known as Raven.

“… recommend, unreservedly and with great enthusiasm, Walk in My Soul.”

“A well plotted, authentically detailed historical novel…that relives the Trail of Tears, and the time that Sam Houston as a young man lived with the Cherokees, and the complex feelings between him and Tiana, the beautiful tribeswoman.

Has anyone spoken for the hammock this afternoon?”

Goodreads reviews for Walk in My Soul