Loquacious Scribble and the Tuesday Club

“Oh, we can make liquor to sweeten our lips
Of pumpkins and parsnips and walnut tree chips.”

The vexed and troubled English colonists in 17th-century Maryland drank any crop that could be steeped, mashed, fermented, and distilled.  They didn’t say no to corn, barley, pine bark, apple skins, cherries, plums, persimmons, or sassafrass roots.  When the Ark and the Dove set out for Maryland’s shores, stowed below were 4,158  gallons of wine and beer “for the use of the right honorable Lord Baltimore and other gentlemen.”  Lord Baltimore never visited his New World real estate, which left more booze for the gentlemen who did. 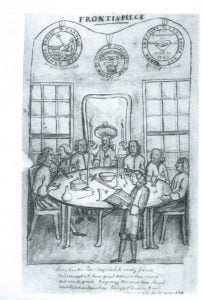 Speaking of booze, in the 14th century the English borrowed the Dutch word bouse which means to swill, guzzle, tope, and tipple.  It also means to drink for enjoyment or good fellowship.  That second definition describes most of the social clubs in Annapolis in the early 1700’s, but particularly the Tuesday Club. 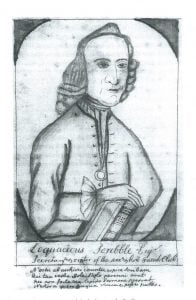 Thirty-three-year-old Scottish physician, Alexander Hamilton, started the Tuesday Club in 1745.  Dr. Hamilton’s face, by the way, does not grace the sawbuck in your wallet.  Nor was his monthly gathering of gentlemen the only one dedicated to toping.   The Ancient South River Club, the Royalist Club, the Redhouse Club, and the Ugly Club preceded it, but the Tuesday Club is the most famous.  That’s because Dr. Hamilton, alias “Loquacious Scribble,” wrote a satirical history of it.  His manuscript of 1,900 pages with illustrations is still available as Records of the Tuesday Club of Annapolis: 1745-56. 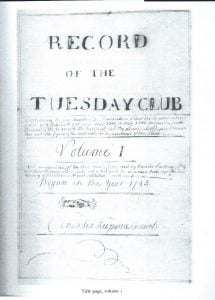 Largely farce, it’s considered the first comic novel in the Colonies.  What Dr. Hamilton reported as fact might be mostly spoof, but here’s what he wrote about the men’s groups that preceded his.  The attempts of the founder of the Royalist Club to introduce democratic reforms “led to an explosion in which he was ignominiously ejected, with considerable damage to his person and apparel.”  The meeting place of the Redhouse Club “was destroyed by lightning in 1732.”   Its successor, the Ugly Club, “was rent with faction and soon expired.” 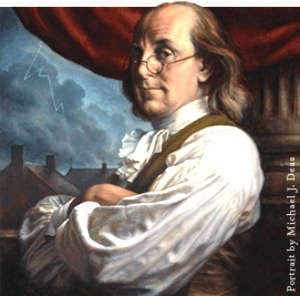 After Dr. Hamilton visited New York’s Hungarian Club he wrote, “”Two or three toapers (sic) in the company seemed to be of the opinion that a man could not have a more sociable quality… than to be able to pour down seas of liquor, and remain unconquered, while others sank under the table.”  Under Hamilton’s leadership, however, the Tuesday Club flourished.  They limited official membership to fifteen, but they invited guests and honorary members.  Benjamin Franklin, dubbed “Electro Vitrifico,” visited them in January of 1754. 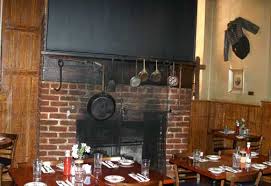 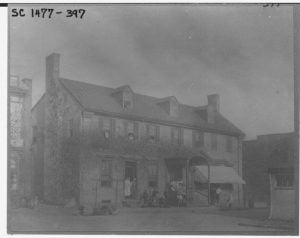 Annapolis bustled as a center of commerce and culture, and the Tuesday Club’s roster listed some of the best educated and most creative minds in town.  Samuel Middleton, the original owner of Middleton Tavern, belonged.  So did Jonas Green, publisher of the Maryland Gazette.  Others included the pastor of St. Anne’s church, a lawyer, a judge, the Secretary for Indian Affairs, and several government officials.  Dr. Hamilton ran for office and won, even though on election day a melee broke out with, as he put it, “shouting, cudgeling, and breaking of heads.”

The men called their meetings Sederunts, Latin for “They sit.” Each member received an alias – Jealous Spyplot, Prim Timorous, Philo Dogmaticus, Merry Makefun, and Crinkum Crankum, among others.  They gathered every Tuesday evening, most often at Dr. Hamilton’s home on King George Street, and sometimes at Middleton Tavern.   The Tuesday Club exemplified the Age of Enlightenment’s enthusiasm for literature, music, theater, and philosophy.  Dr. Hamilton and his colleagues added drinking, humor, and tomfoolery. 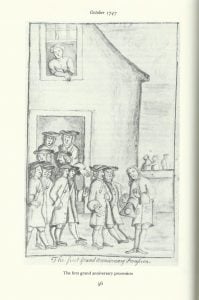 The weekly program began with a candle-lit dinner, a punch bowl making the rounds, and toasts to the King and then to the “ladies.”  Some of those toasts were off-color, as when someone commented on how easy it was to find a word to rhyme with “Miss Hunt.”  As Hamilton put it, “We converse, Laugh, talk, Smoke, drink, differ, agree, Philosophize, Harangue, pun, Sing, Dance, and fiddle together.”  Members composed some of the earliest known secular music in America and performed on fiddle, flute, cello, viola, and harpsichord.

To allay the province’s bitter partisan disputes, the club’s “gelastic law” required everyone to burst into laughter at mention of Maryland politics.  They also read their humorous or satirical poems and essays, and discussed philosophy and literature.  Hamilton and Jonas Green composed punning riddles called conundrums and challenged members to solve them.  Some of them bordered on  bawdy.  “Why is a wanton lass like a book just published?   Because she is in sheets and wants stitching.”  (“stitch” was an 18th-century term for lying with a woman). 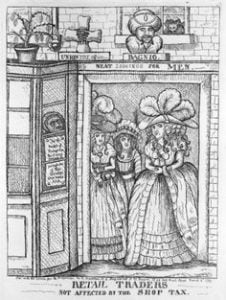 The conundrums did what politics could not.  They caused dissention.  They were such groaners that some members demanded they be abolished as a “Species of low wit altogether unworthy of the dignity of the Club.”  The factious group was led by William Cummings, aka Jealous Spyplot.  Hamilton and Green claimed Spyplot was miffed because he couldn’t guess the answers and had to forfeit all the games, but the conundrums were finally abolished.

Club members organized balls and staged elaborate processions.  People lined the streets and watched from windows, walls and balconies as they passed by, decked out in their “double gilt badge medals.”

The Tuesday Club met until Dr. Alexander Hamilton’s death on Tuesday, May 11, 1756.  He was forty-four years old.   His friend, journalist Jonas Green, wrote, “No man, in his Sphere, has left fewer enemies, or more friends.”

The Tuesday Club’s members were prominent men in colonial society but they mocked both Old and New World aristocracies.  They blurred the distinctions among social classes and provided a new sort of public entertainment.  In a way, their legacy lives on as people gather in bars to play Trivia, discuss current issues, listen to local musicians perform and sing karaoke themselves.